Greece slides towards the euro trapdoor 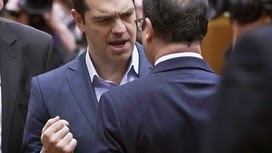 If there is one thing all sides in the Greek crisis publicly agree on, it is that Greece should stay in the eurozone. Yet with every day that passes without the Greek authorities and their creditors even finding a common basis for discussion, that exit creeps ever nearer.

The leaders met this week at an EU summit, again without agreement on how Greece can implement reforms that unlock lending from the troika of the eurogroup of finance ministers, the International Monetary Fund and the European Central Bank. What is becoming ever clearer is that, whatever the faults of the creditors, the Greek authorities are proving themselves to be unreliable negotiating partners.

Since the Syriza government was elected in January, the contours of a deal have been clear. In return for structural changes to release suppressed potential in the Greek economy, the troika will first relax primary fiscal deficit targets to encourage growth and then discuss a writedown of the overhanging debt stock. In the few months that it will take to negotiate this, the ECB will keep the Greek banking system afloat by permitting the Greek central bank to supply liquidity.

The problem is that nearly two months after Syriza took office, negotiators are barely any closer to a solution. Yanis Varoufakis, Greece’s finance minister, has proved himself an excellent self-publicist but not a reliable interlocutor. Some of the list of proposed reforms he produced to push the talks forward two weeks ago, including a proposal to wire up tourists as undercover tax inspectors to hunt for VAT fraud, have bordered on the eccentric. It is little surprise that his eurozone counterparts are often forced to bypass him and deal directly with Alexis Tsipras, the prime minister.