Greece and the euro zone: Bumbling toward disaster 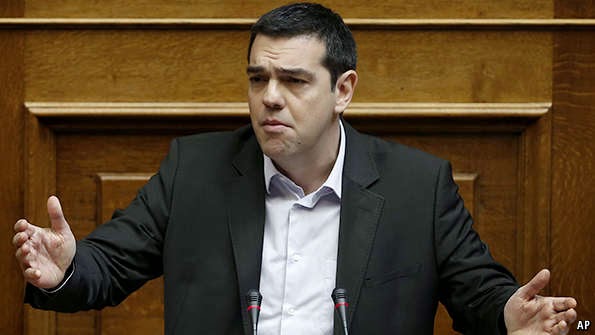 It was an act of doublethink to make Orwell proud. Yesterday afternoon Alexis Tsipras, Greece’s prime minister, told his parliament that he was “determined” to stick to the February 20th agreement with the euro zone that extended Greece’s bail-out by four months. He immediately proceeded to urge MPs to pass a “humanitarian” law providing food stamps and subsidised energy to Greece’s needy. This was precisely the sort of measure that the February deal obliged Greece to avoid taking without consulting its creditors.

Mr Tsipras therefore arrives in Brussels today, for a summit of Europe’s heads of government, under a cloud of mistrust. The Greek situation is not on the formal agenda, but it is at the top of everyone’s minds. Under the terms of February’s agreement Greece is supposed to draw up and begin implementing structural reforms in exchange for dollops of bail-out cash to keep its economy afloat.

Instead ministers in the Syriza-led government have spent their time behaving clownishly. Mr Tsipras has been bashing Germany for failing to honour past war reparations obligations in full. His defence minister threatened to open Greece's doors—and therefore Europe's—to poor and potentially dangerous migrants from the Middle East. Yanis Varoufakis, the finance minister, looked anything but troubled in a photo shoot with a glossy French magazine. Meanwhile, the work of solving Greece’s problems has barely begun. Technical teams dispatched to Athens to uncover the true state of Greece’s finances and discuss reform details have been met with stonewalling and delay. No one, therefore, knows precisely how bad Greece’s cash crunch is. Few expect it can fund itself for more than a few weeks, however. And a solution appears as distant as ever.