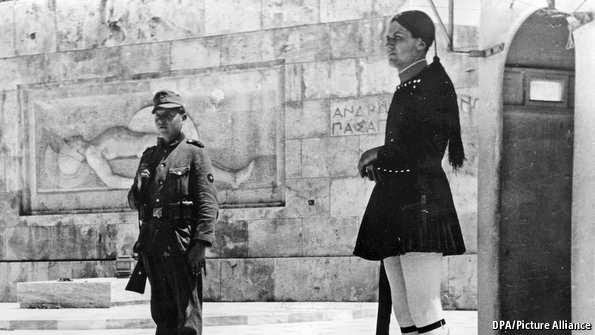 The level of debate between Germany and Greece, protagonists in a drama that could make or break the euro zone, could hardly be called edifying. Take, for example, the YouTube video from 2013 which shows Yanis Varoufakis, then a left-leaning economics professor, arguing that Greece should simply default on its debts and “stick the finger to Germany”, and making an appropriate hand gesture for emphasis. When Mr Varoufakis, now Greece’s finance minister, was confronted with the clip on March 15th during a talk show on German television, he claimed the footage was doctored. The ensuing “Fingergate” lasted days, as the German media proved that the video was genuine, albeit taken out of context. Germany’s pundits spluttered with rage: the Greeks were mendacious as well as impertinent.

This week marked a nadir in relations between Greece and its largest creditor. The tone has been deteriorating ever since January when Alexis Tsipras, leader of the far-left Syriza party, took over as Greek prime minister. It is clear that Wolfgang Schäuble, Germany’s finance minister, and Mr Varoufakis no longer trust each other as partners in negotiations to extend Greece’s bail-out. When Mr Schäuble called his counterpart “foolishly naive”, Greece’s ambassador in Berlin filed a diplomatic protest.

Greece’s defence minister has threatened to let masses of Syrian refugees, possibly including terrorists, pass through to Germany. Europe has only itself to blame if that happens, he said. The Greek justice minister suggested that, as part of his country’s ongoing claims against its old oppressor, he might even seize the Athens property of the Goethe Institute, Germany’s cultural agency.