When Dutch Finance Minister Jeroen Dijsselbloem raised the possibility that Greece might need to impose capital controls in a radio interview last week, it seemed like a crazy indiscretion. Why would a senior member of the euro establishment effectively tell people "Hey, we're considering locking your money inside the country, so you might want to get your euros out while you still can," and risk accelerating outflows from the country's already enfeebled banking system?

And when the European Central bank decided yesterday to grant more than 1 billion euros ($1.1 billion) of extra funds to Greece's banks, it was hard to divine the motivation for the altruism. Was it a carrot to incentivize the government to get serious about meeting the demands of its creditors? Or was it an emergency infusion, acknowledging that Greece is fast running out of money as well as time?

The following chart, based on data just released by the Bank of Greece, hints strongly at the latter explanation: 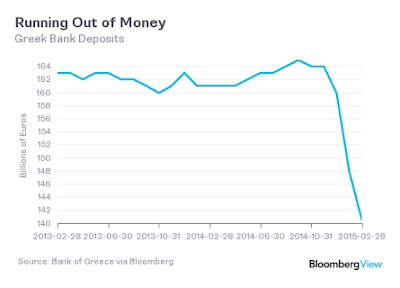