All we ask is that Europe give Greece a chance 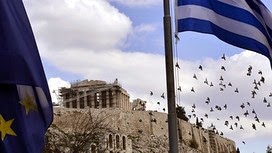 It is a common belief that the Greek government is seeking special treatment relative to other stressed eurozone members. We are not; we are seeking equal treatment.

Since the onset of the crisis, our economy has shrunk 26 per cent; unemployment has risen from 8 to 26 per cent; and wages have declined 33 per cent. These outcomes are worse than those experienced by any country during the 1930s and far worse than those projected under the two Greek adjustment programmes. This is why the Greek government has criticised these programmes.

Our fiscal adjustment has been larger than in other countries. Since 2009, spending cuts and tax increases amounting to more than 45 per cent of household disposable income have been implemented. In Portugal it was 20 per cent; in Italy and Ireland 15 per cent.

Not only have the fiscal measures been larger, but for each percentage point of consolidation, the economy has contracted more. This is because the Greek economy is less open than others; any decline in demand hits domestically produced goods more than imports. Successive rounds of austerity exacerbated the contraction in gross domestic product. And with that the ratio of debt-to-GDP rises, making debt dynamics unmanageable. Greece is borrowing ever more to pay back earlier debts.