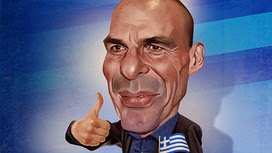 Earnest, energetic and wearing an electric blue, open-necked shirt that hung loosely under his long leather jacket, Yanis Varoufakis toured Europe’s capitals this week in search of debt relief and a new deal for the Greek economy. By Friday, it appeared that Greece’s finance minister had made minimal progress on the political front. Indisputably, however, he had turned upside down conventional notions of modern finance ministers as dull, sober-suited number crunchers.

Some fashion commentators said unkindly that he looked like a nightclub bouncer, which would presumably make Alexis Tsipras, the prime minister, the joint’s owner. Actually, both men have the handsome features of film stars, Mr Tsipras looking like Sean Connery in Dr No and Mr Varoufakis like the ageing, shaven-headed boxer in Pulp Fiction, Quentin Tarantino’s 1994 movie. Like that Bruce Willis character, Mr Varoufakis even arrived at his first cabinet meeting on a 1300cc Yamaha and is not short of female admirers. “Damn, the Greek finance minister is sexy,” Isabel Moreira, a Portuguese socialist member of parliament, wrote on her Facebook page.

The casual dress favoured by Mr Varoufakis, and other Greek ministers, is more than a style choice. It is a statement that Syriza, the radical leftist party that dominates the ruling coalition in Athens, is an anti-establishment movement intent on challenging German-led economic orthodoxy.