Try to talk about macroeconomics, and you’re sure to encounter accusations that your policies would turn us into Weimar Germany; those wheelbarrows full of cash remain the ultimate bogeymen for many, despite years of being wrong about everything. As some of us have noted, however, there’s a peculiar selectivity in the use of Weimar as cautionary tale: it’s always about the hyperinflation of 1923, never about the deflationary effects of the gold standard and austerity in 1930-32, which is, you know, what brought you-know-who to power.

But that’s not the only piece of Weimar history that has gone missing; there was also the reparations issue, which as I noted yesterday has considerable bearing on the issue of how large a primary surplus Greece must run.

Thinking about this led me to an interesting question. We know that part of the reason large postwar reparations were such an unreasonable and irresponsible demand was the dire, shrunken state of the German economy after World War I. So how does Greece compare? The answer startled me: 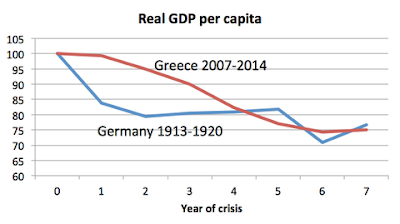