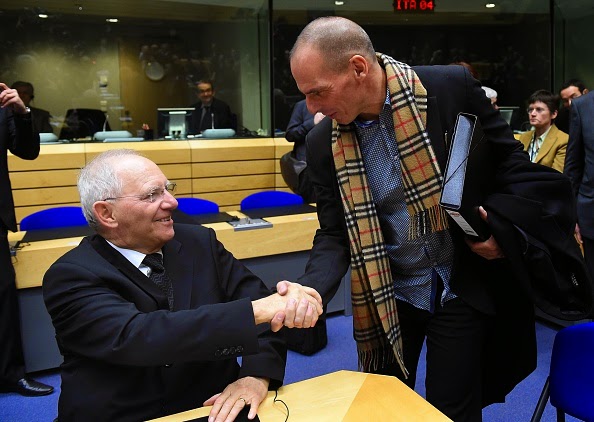 Wednesday night’s breakdown in talks between Greece and the other 18 eurozone finance ministers happened at such the last minute that many of the participants in the eurogroup meeting – including Wolfgang Schäuble, the powerful German finance minster – didn’t even know it had happened, since they had already left the building.

According to several officials involved in the talks, Yanis Varoufakis, the Greek finance minister, had agreed to a joint statement with his colleagues, a statement that was even signed off by Greece’s deputy prime minister, Yannis Dragasakis, who was also in Brussels for the gathering.

Once agreed, the eurogroup meeting broke up and Schäuble and several of his colleagues headed out the door. But officials said Varoufakis put in one last call back to Athens to inform them what he had just agreed to – and government officials vetoed the statement.

More
Posted by Yulie Foka-Kavalieraki at 8:59 AM