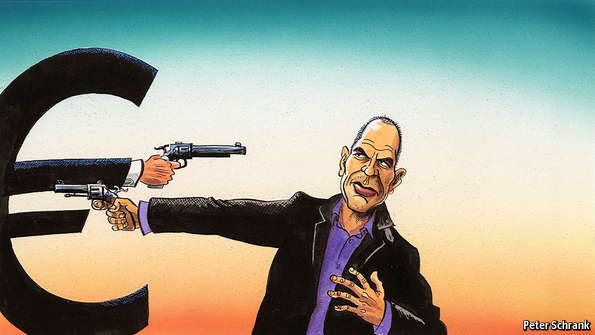 Clip-Clopping around Europe over the past few weeks, Yanis Varoufakis, Greece’s dashing finance minister, has urged the euro zone to chart a new course. Endlessly forcing new loans upon indebted countries like Greece in the pretence that they will one day be repaid, he argued, was a strategy for depression and deflation. “The disease that we’re facing in Greece,” he told the BBC, “is that a problem of insolvency for five years has been treated as a problem of liquidity.”

This view would not seem outlandish in the academic world that Mr Varoufakis recently quit. Few believe that Greece’s debts, worth over 175% of GDP, will ever be repaid in full. But saying so betrayed a woeful misunderstanding of the euro zone’s rules. If the European Central Bank shared Mr Varoufakis’s view, it would have to cut off Greek banks, potentially driving Greece out of the euro. Indeed, earlier this month, when the minister visited the ECB in Frankfurt, Mario Draghi, its president, snippily told him to keep his opinion to himself. He has not repeated it since.

Mr Varoufakis’s gaffe is a mere footnote in a list of mishaps that have characterised Greece’s miserable experience in the euro. But it is depressingly typical for a government that, for all its high popularity at home, has squandered every opportunity to improve its lot, and ultimately that of the euro zone. Even as Mr Varoufakis and his colleagues in Greece’s ruling Syriza party have loftily declared that the changes they seek would benefit all Europeans, not just Greeks, their negotiating strategy has been small-minded, self-defeating and naive.