One Way Greece Can Keep Its Banks Alive

An outflow of deposits from Greek banks will put pressure on the government to limit how much money people can withdraw or transfer outside the country as European Union nations lose patience with providing a lifeline.

Imposing capital controls, as Cyprus did two years ago when its banks faced a crisis, would buy time for Prime Minister Alexis Tsipras’s government to negotiate debt relief, according to economists including Daniel Gros, director of the Centre for European Policy Studies in Brussels.

“Capital controls may be the only option to stop the bleeding in the banking system,” Gros said in an interview. 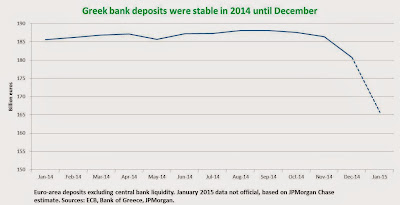