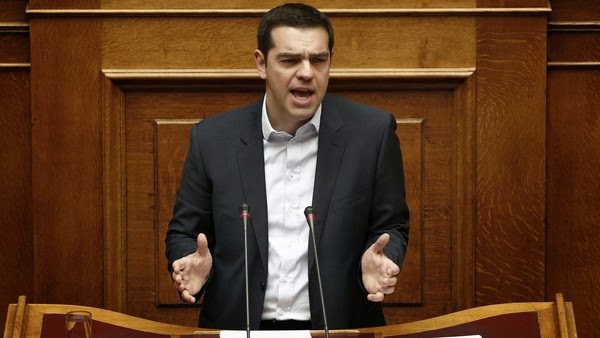 Alexis Tsipras, the new Greek prime minister, has insisted he will not seek an extension to the country’s current bailout, putting his leftwing government on a collision course with its creditors in the run-up to this week’s EU summit.

In his first speech to parliament as prime minister since taking office last month, Mr Tsipras said on Sunday: “This government isn’t justified in seeking an extension . . . The bailout has failed.

“The Greek people gave a strong and clear mandate to immediately end austerity and change policies,” he said. “Therefore the bailout was first cancelled by its very own failure and its destructive results.”

Many observers expected a policy switch to be announced in the speech after Mr Tsipras and his finance minister Yanis Varoufakis had failed to win support last week from other eurozone leaders for a restructuring of Greece’s €315bn foreign debt during a first round of visits to European capitals.

More
Posted by Yulie Foka-Kavalieraki at 11:26 AM