Merkel keeps up the heat on Greece 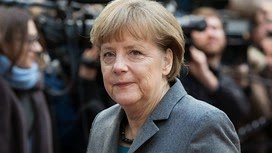 Angela Merkel, German chancellor, reiterated her government’s hardline stance on Greece’s options for a fiscal rescue, saying Athens could either complete all the requirements of its €172bn bailout by the end of the month or request an extension of the programme beyond its February 28 expiry.

It also raised the stakes ahead of a critical meeting of eurozone finance ministers on Monday, a self-imposed deadline for Athens to either ask for a programme extension or find itself without a fiscal backstop for the first time since the eurozone crisis started in May 2010.

“Europe always aims to find a compromise, and that is the success of Europe. Germany is ready for that,” said Ms Merkel. “However, it must also be said that Europe’s credibility naturally depends on us respecting rules and being reliable with each other.”

More
Posted by Yulie Foka-Kavalieraki at 1:41 AM