Mentioning the war: a Greek strategy to win German hearts 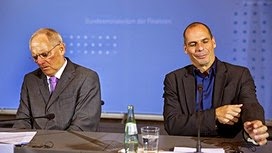 Yanis Varoufakis, the Greek finance minister, was in Berlin on Thursday for a meeting with Wolfgang Schäuble, his fiscally hardline German counterpart, as he seeks to alter the terms of the European bailout. The two are not natural soulmates; Schäuble is a formal and old-style German politician while Varoufakis is an ebullient and youthful 53-year-old, an economics blogger and professor at Essex, Sydney and Athens universities who dresses with nightclub-bouncer chic and whose party uses the imagery of the Nazi occupation to rally Greek resistance.

Yanis Varoufakis: I apologise, I was paying a visit to the site of Hitler’s Bunker.

WS: Yes. You are all rather fond of Nazi sites. I saw your leader’s visit to the memorial to Greeks shot by the Nazis. Perhaps you will find time to squeeze in a visit to Wannsee while you are in Berlin.

YV: Let us not get off on the wrong foot. I’ve come with a present for you.

WS: How thoughtful. Is it a book?

YV: Yes, Anthony Beevor’s Crete: the Battle and the Resistance.

WS: Of course, Greeks and gifts.