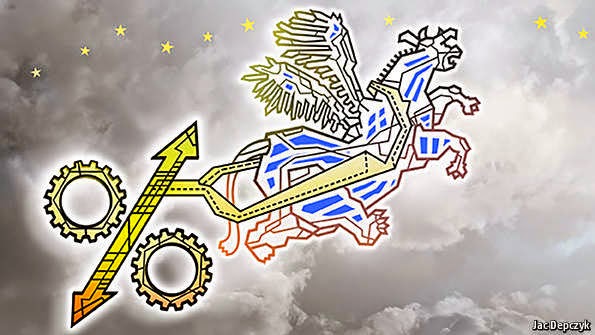 The tie-less leaders of the new Greek government are short of neckwear but not of off-beat policy ideas. Their talk of reversing some hard-fought budget cuts, most notably by rehiring hordes of sacked bureaucrats, put markets in a panic. But the “smart debt engineering” mooted by Yanis Varoufakis, Greece’s new finance minister, shows more promise. At the heart of his proposal is a plan to swap lots of existing Greek debt for “GDP-linked bonds”—an old idea whose time may at last have come.

Since the 1980s globalisation has sent periodic surges of capital from the rich world to sovereign borrowers in the developing world. Many were ill-equipped to cope. Borrowing binges often ended in crises, prompting economists to think about ways to make swimming in the torrent of global capital less dangerous.

Indebted economies are more likely to get into trouble when the economic outlook changes. During booms borrowing often seems attractive to leaders, who reckon that rising incomes will make servicing the debt a doddle. Commodity exporters make similar calculations when the prices of oil, metals and the like go up. But good times inevitably end, dashing the borrowers’ assumptions and making their debts more difficult to bear.