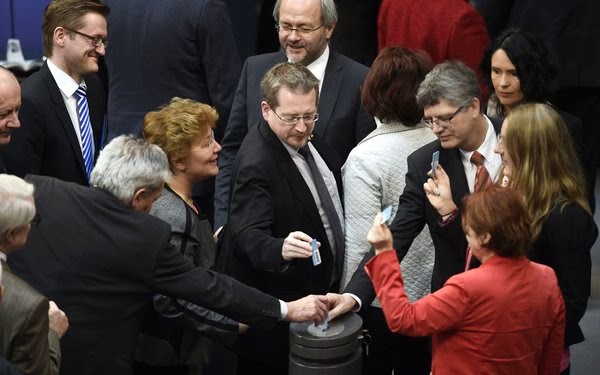 The debate lasted more than two hours, with one conservative lawmaker sharply accusing the Greek government of acting in bad faith. A liberal railed against Greek tycoons exploiting the tax system. And the powerful finance minister argued that lawmakers must put aside their differences and accept the controversial four-month extension of Greece’s bailout program.

Ultimately, lawmakers approved the Greek program on Friday — just not those in Greece. The vote was held in the Bundestag in Berlin, not inside the Greek Parliament building looming over Syntagma Square in Athens. Parliaments in Finland, Estonia and the Netherlands also granted approvals this week, as non-Greek politicians voted for Greece’s future even as Greek politicians did not.

The odd spectacle did have a rationale — the Greek deal required parliamentary approval in creditor countries — yet it also underscored how the economic crisis has accentuated the irregular shape of federalist democracy in the European Union, where the political structure remains under construction and the lack of democratic accountability of officials in Brussels is a sore point.