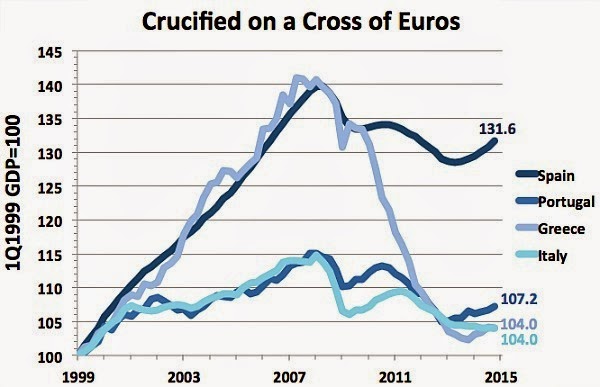 In the long run, we're all dead, but if you're part of the eurozone, what's the difference? You might as well be already. Indeed, it seems almost impossible, but Italy has only grown 4 percent—in total—since the euro was created 16 years ago. That's worse than Greece.

Now, it hasn't all been bad news in Europe. Not only did Germany grow at a faster-than-expected 2.8 percent annual pace in the fourth quarter of 2014, but so did Spain. Even Portugal grew at a 2 percent pace. It was enough that the eurozone as a whole grew an at-least-it's-not-a-recession 1.2 percent. But these glimmers of good news are only those—glimmers. Greece's latest austerity showdown with Europe has scared its banks and businesses so much that its nascent recovery turned into a 0.8 percent contraction. And while Italy didn't shrink, it didn't grow either.