Greek negotiators should learn a little from Britain 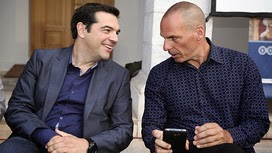 The proposal for “debt-swapping” floated by Yanis Varoufakis, Greece’s finance minister, is both ingenious and constructive. But whatever its merits — and as always in financial transactions, the devil will be in the details — by putting it forward in this way Greece is making what can be termed The British Mistake. Just as for David Cameron, Britain’s prime minister, there is still time for Alexis Tsipras, Greece’s triumphant leader, to remedy this error.

The error arises from the instincts of national politics. These incline Mr Tsipras and Mr Cameron to fight alone as proud and plucky countries. Greece claims it is a special victim of German “subjection” and is battling for a better deal from the EU. Britain is fighting against the throttling red tape of Brussels busybodies. Isolation and victimhood may sound noble. The trouble is, such nobility is for losers.

To stand as little Greece against the other 18 eurozone members, or as little Britain against 27 EU members, is a potentially fatal mistake. Neither is in a strong enough position to bully or blackmail the others. And such unilateral brinkmanship is likely to make it harder for Germany and others to make the deals that Greece and Britain need.

Clearly, given the promises about debt relief he made during Greece’s election campaign, Mr Tsipras needs to achieve results, which is the same feeling Mr Cameron has had on the topic of EU immigration, given that the hounds of the UK Independence party and the eurosceptic rats in his own Conservative party are thirsty for his blood. But for both men, and their countries, placing a single large bet on a bilateral negotiation would be tantamount to planning for defeat and life outside the EU.