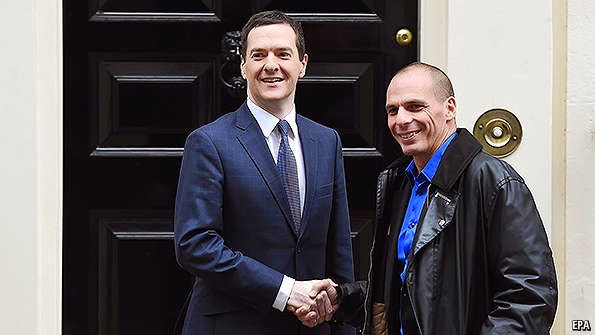 It has certainly been a rocky start. In its first week in office, Greece’s new government pledged to row back reforms, halt privatisations and to ignore calls for an extension to its second bail-out programme, which expires at the end of February. The announcements sent share prices of Greek banks tumbling, and hastened a worrisome flow of euros out of the country. Athens even triggered a brief, if exaggerated, flurry of concern in Brussels that it might seek to disrupt the European Union’s Russia policy. This week the charm offensive begins: Alexis Tsipras, the new prime minister, and his finance minister, Yanis Varoufakis, are touring European capitals to make their case for a new deal for Greece.

Monday found Mr Varoufakis in London for a meeting with George Osborne, chancellor of the exchequer (pictured). Mr Osborne termed the Greek standoff “the greatest risk to the global economy”, and called for Athens to act responsibly but also for the EU to devise a better plan for growth. In Berlin, in contrast, the rhetoric has been hardening. On Friday Angela Merkel, Germany’s chancellor, confirmed what everyone knew: that she would countenance no cancellation of Greek’s public debt, most of which is owed to European institutions and governments. This followed a bad-tempered meeting in Athens at which Jeroen Dijsselboem, head of the Eurogroup of finance ministers, told Mr Varoufakis to forget his idea of a grand “debt conference” to discuss such ideas.

Mr Varoufakis met a friendlier reception in Paris on Sunday, where the Socialist government’s finance minister, Michel Sapin, said France was “more than willing” to support Athens, and even called for a “new contract between Greece and its partners”. Nonetheless, the weekend’s most significant intervention belonged to Erkki Liikanen, head of Finland’s central bank. On Saturday Mr Liikanen, who sits on the governing council of the European Central Bank, confirmed that if Greece were no longer in a bail-out programme, the ECB would no longer accept its government’s junk-rated bonds as collateral. That would cut off Greek banks, already facing an accelerating outflow of deposits, from ECB liquidity assistance.