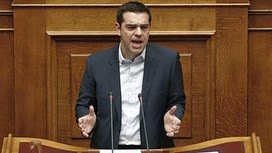 Greece is to request an extension of its international bailout on Wednesday along the lines of a compromise deal proposed by EU officials but spurned by eurozone finance ministers this week.

Athens has been given a deadline of the end of this week to agree to prolong its €172bn rescue programme, without which it could soon run out of money. In a defiant speech to parliament, Alexis Tsipras, Greek prime minister, said his country “won’t accept an ultimatum but will negotiate as an equal partner”.

The new Greek government wants to revive a putative deal floated by Pierre Moscovici, the European Commission economic chief on Monday, before negotiations among finance ministers collapsed in acrimony.

”We will ask for an extension of the current bailout agreement within the framework of the Moscovici plan,” said a senior cabinet minister.

According to officials involved in the discussions, the plan would allow Athens to extend its bailout for four months beyond its expiry date of February 28 in exchange for agreeing to a series of principles. Greece would not roll back economic reforms; it would continue to run a primary budget surplus; it would pledge to pay its creditors in full. In exchange, Athens would be given leeway in deciding which reforms it would agree to.