Greece is all the rage in world markets right now.

Anti-austerity party Syriza was voted into power in the latest parliamentary elections, and since then investors have been on edge as Greece and its creditors enter negotiations on debt repayment.

But for Greece, dealing with financial problems is nothing new.

This chart, which comes to us from Bank of America Merrill Lynch, shows that in the past two centuries, the number of sovereign debt defaults in Greece is 6.

And what's more, BofA notes that Greece has spent 90 of the past 192 years in either default or debt restructuring.

Which is a lot. 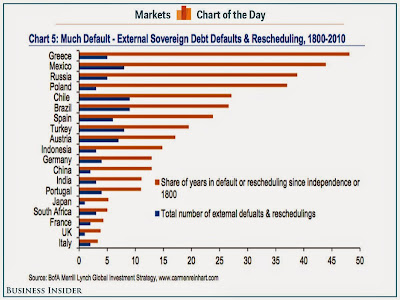