Greece and the euro: Hitting the ground running—backwards 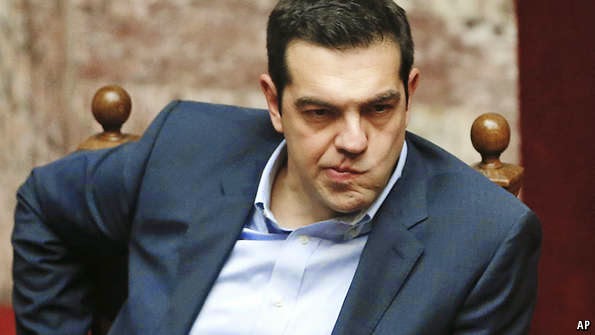 When the far-left Syriza party won the Greek election last month, the hope was that the new prime minister, Alexis Tsipras, would moderate his demands so as to compromise with his country’s creditors. After all, he (like the vast majority of Greeks) wants to stay in the single currency. But even as he prepared to meet fellow European Union leaders for the first time this week, he was making a Greek exit from the euro ever more likely.

Mr Tsipras has put forward some good arguments against the austerity that has been imposed on Greece as the price of its bail-outs. He has sound ideas on attacking corruption, fighting tax evasion and shaking up Greece’s cosy business elite. His ministers now talk of keeping 70% of the old government’s reforms (see article). But his first moves in office included promises to raise the minimum wage to pre-crisis levels, reverse labour-market reforms, restore pension increases, rehire thousands of public servants and scrap privatisation projects. These would not just breach Greece’s bail-out terms, but also wreck the country’s economic prospects.

To reverse course in this way when Greece’s economy is at last growing and unemployment is falling is perverse. Greece needs more, not fewer reforms: despite progress in regaining lost competitiveness, its exports remain weak. In its business climate it lags behind neighbouring Bulgaria, the poorest EU country, in areas such as enforcing contracts, registering property and providing credit.