Contrary to all that's been said about Germany's uncompromising stand on helping Greece, Berlin showed today that it's willing to give the far-left government of Alexis Tsipras a chance. All he needed to do was clearly state that he wouldn't make any economic moves before consulting his country's creditors. Even if the rest of Tsipras's plans remain rather vague, Germany seems prepared to offer an endorsement -- while continuing to watch over his shoulder.

In accordance with a provisional deal between Greece and the Eurogroup last Friday, Athens was supposed to detail its policy proposals to secure a four-month extension of the country's current bailout. Finance Minister Yanis Varoufakis put them in an e-mail that landed in the mailbox of Eurogroup President Jeroen Dijsselbloem at 11:15 pm last night, 45 minutes before the deadline.

Here's a word cloud representing the words most frequently used in the document: 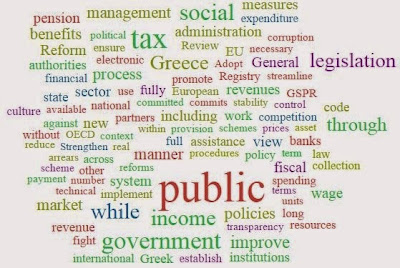