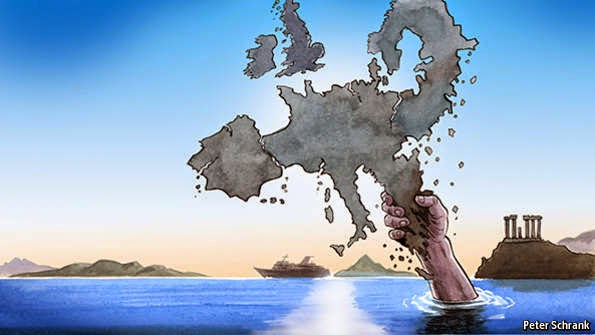 Wolfgang Schäuble, Germany’s flinty finance minister, summed it up neatly, if inadvertently. “Nobody is forcing anything on Greece,” he told reporters in Brussels. “But the obligations apply.” A day earlier Greek voters, chafing at those same obligations after many years of recession, had elected a government led by the anti-austerity Syriza party. Greece may have brought its problems upon itself. But after five years of control by a foreign “troika”—the European Commission, the European Central Bank and the IMF, which have enforced the terms of Greece’s bail-outs—it is not hard to see why some Greeks believe that plenty of nasty things have indeed been forced on them.

Mr Schäuble, Europe’s foremost ayatollah of austerity, may not have meant to highlight the tensions at the heart of the euro zone. But Greece has made them impossible to ignore. Working out how to redistribute the pain of reducing its huge debt burden is only a start. Yanis Varoufakis, the leather-jacketed new Greek finance minister spent the week touring Europe’s capitals in search of a deal, spraying sound bites and inspiring fashionistas. His proposals were vague, but a uniform refusal among Greece’s creditors to consider explicit debt write-offs led him to put forward ingenious schemes, including GDP-linked bonds (see Free Exchange), to engineer some relief in other ways.