Kevin O’Rourke is angry at the Irish government for self-righteously lecturing Greece on the need to suck it up and be austere like the Irish. Indeed. Here’s a different comparison: 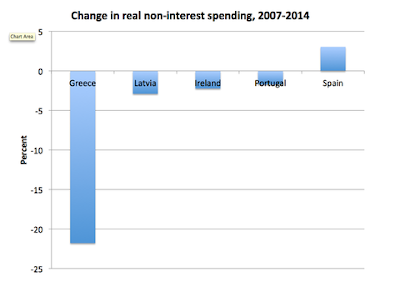 Greece has done a lot more austerity than those countries cited as supposed success stories (which is another issue — success being defined as “not total collapse, and slight recovery after years of horror” — but that’s a different story). And as Kevin says, the Irish government is acting against its own citizens by beating up on Greece.