Can Greece Make a Deal with Europe? Part 2: What Kind of Deal Can Greece Hope For? 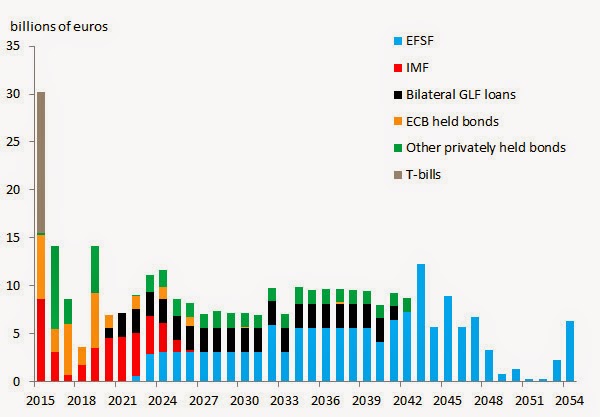 In the confrontation over Greece, Prime Minister Alexis Tsipras is under more pressure than the euro area to make a deal to avert a default or a Greek exit. The euro can thus hold out for 80 to 90 percent of their demands. For Tsipras, the trick will be to make concessions but sell the deal to the Greek people as a dramatic change from the status quo. It should consist of three elements: the Greek debt stock, the short-term fiscal stance, and structural economic reform issues.

The euro area can be flexible in negotiating the restructuring of the debt stock, which is 175 percent of GDP. Some 80 percent of that debt is held by the official sector in the euro area (60 percent), the International Monetary Fund (12 percent), and the European Central Bank (8 percent). The rest is held by the private sector (including Greek banks, other banks, and various speculators) in restructured government bonds (14 percent) and short-term T-bills (6 percent).

The fact that most Greek debt is held by public institutions backed by European taxpayers makes Greece’s case special and inapplicable to other troubled countries. Public debt throughout the euro area is in the hands of private (and often mostly domestic) investors.1 The euro area can restructure Greek debt without setting a precedent for other members. Greece’s unusual status thus presents obstacles and opportunities for a new agreement.