Athens plots a daring escape from the troika 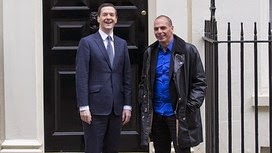 Syriza is as radical as any party to take power within the eurozone. Hardly any of Greece’s new cabinet have experience of government; predictably, its first week was studded with chaotic interventions, including a clumsy blunder into EU-Russian relations. Syriza’s rhetoric is still more suited to a university seminar than a serious programme of government.

To some on Europe’s northern fringe, just to meet Syriza is to crumble before blackmail. If you believe half of his past rhetoric, its leader Alexis Tsipras plans to dance wildly on the crumbling edge of the eurozone, to scare its thriftier members into accepting his demands. These would include debt repudiation, the unravelling of structural reforms, and rehiring thousands more civil servants. On this account Syriza would return Greece to the failed clientelism of the past and embolden anti-austerity parties everywhere.

Many EU leaders would rather take their chances with “Grexit” than cave in to threats, even if this risked a deeper eurozone recession. But as Yanis Varoufakis tours European capitals to win support for a new deal, Greece’s finance minister deserves a full and even sympathetic hearing.