A scrappy deal keeps Greece from the wolves 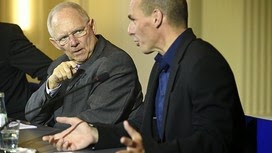 It is a sign of low expectations in the handling of the Greek debt crisis when a deal to keep the country from chaos for four months at the most and only 72 hours at the least is hailed as a great breakthrough.

After four weeks of brinkmanship, the eurogroup of finance ministers and Greece’s Syriza-led government emerged on Friday night with an interim pact that should stave off disaster for a while.

In the sense that it avoided catastrophe, the agreement was good for both sides. The bailout money will continue to come, and the European Central Bank will stand behind Greece’s banking system, for the time being. But grandstanding and mutual accusations of bad faith during the talks have done needless damage to the reputation of Greece’s government. They have also dimmed the prospects of a constructive agreement in June when the four-month extension runs out.