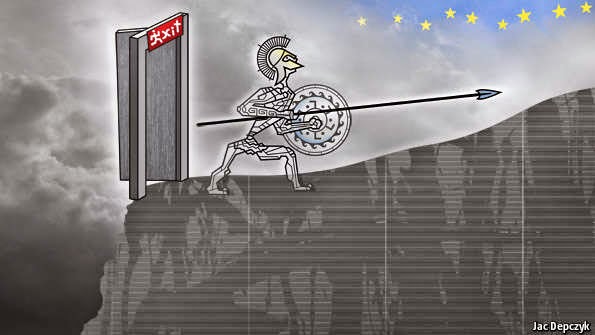 In 2012 Greece held two elections which might have led to its exit from the euro zone. In the event, that was avoided—a good thing since the costs of a “Grexit” would almost certainly have outweighed any gains, not only for Greece but for the entire currency area. Now yet another election, on January 25th, threatens Greece’s membership of the euro zone. What would Grexit entail this time? And does it make any more sense?

The mechanics of Grexit would be straightforward. The change in currencies would be immediate as the government redenominated domestic assets and liabilities into drachma, most likely on a one-to-one basis with euros. The Greek central bank would be severed from the European Central Bank (ECB) in Frankfurt. Instead it would conduct Greek monetary policy, in drachma, through operations with banks whose domestic balance-sheets would now be in drachma, too.

Though the starting-point might be parity between a euro and a drachma, the new currency would quickly depreciate. Estimates from the IMF in 2012 suggested that it would fall against the euro by 50%. Such a reduction could spur an eventual economic revival by making Greece more competitive. After Argentina severed its decade-long link with the dollar in 2002, it experienced several years of rapid growth, helped admittedly by a commodity-price boom that played to its strengths as an agricultural exporter. The hope would be that Greece could also exploit its improved competitiveness, especially by attracting more tourists.