Why Grexit would not help Greece

by Guntram B. Wolff

The genie is out of the bottle: Europe is again discussing the possibility of Greece leaving the euro. With it, the debate has re-emerged whether this would be helpful or not for Greece and whether there would be contagion to other euro area countries. A big question is, of course, how the Greek financial system would survive an exit with a debt restructuring; how long it will take until Greece would regain access to financial markets; and how big the benefit of a debt restructuring is given the relatively low interest load. The absence of external help would be a further factor weighing on Greece. All these factors speak clearly against an exit from the point of view of Greece but they are not discussed in this blog.

In this blog, I want to focus on the claim that Greece needs to exit in order to devalue and in order to regain competitiveness so that it can grow again. This point has again been made prominently by Professor Hans-Werner Sinn of Ifo institute in Munich.

So what do the data tell us? Greece, Ireland, Portugal and Spain all had very significant adjustments of the current account since 2007 from high deficits to close to balance or surplus. However, the composition of the adjustment has been very different (see chart). In Ireland, Spain and Portugal, the largest part of the adjustment has come from an increase in exports. All three countries have therefore managed to change their production structures and substantially increase exports. This is a desirable and healthy way of adjusting, which also shows that it was not primarily a demand compression that drove the external adjustment in these three countries. Also in Italy, the increase in exports was larger than the decrease in imports.

Greece stands out as an outlier in external adjustment. Its adjustment was almost exclusively driven by a contraction in imports while exports have only very recently been positive. 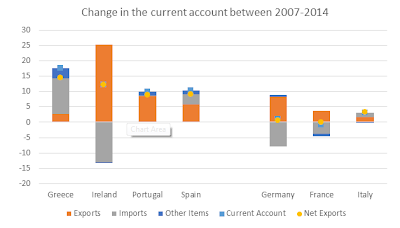