The Guardian view on the Greek election: a new deal for a new era 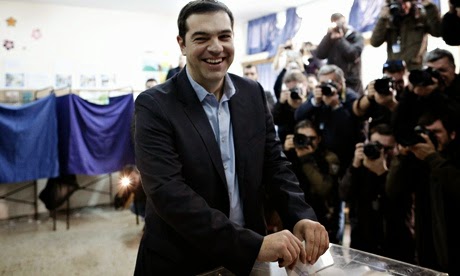 At a stroke, the Greek general election of 2015 has destroyed the post-recessionary political norms and assumptions of Greece and shaken those of the European Union to the core as well. For six years, Greeks have protested against harsh eurozone disciplines, but the nation’s eventual, though resentful, readiness to put up with the resulting hardships has been a source of stability. In Sunday’s vote, however, Greek patience finally snapped, particularly among the middle classes, ousting the pro-austerity government of New Democracy and electing the anti-austerity left-coalition Syriza in its place. As a consequence, the past is no longer much of a guide to the future, at least in Athens, and perhaps elsewhere in Europe.

Amid torrents of speculation about the meaning of the Greek result, the one certainty is that Syriza’s victory marks a historic refusal by Greeks to continue with the austerity to which they reluctantly assented in return for the €240bn bailouts of 2010 and 2012. Those bailout terms were due to be assessed next month any way. Now that process will take on far greater urgency. The probable new prime minister, Alexis Tsipras, has won a mandate to demand significant changes. He will need to be able to show Greeks that he can ease the wage and pension cuts and the higher taxes with which Greeks have struggled for so long. For the moment, Greece’s democratic verdict defines everything else. The question, both for Greece and for Europe, is what comes next. No one yet really knows the answer to that.