The era of Syriza 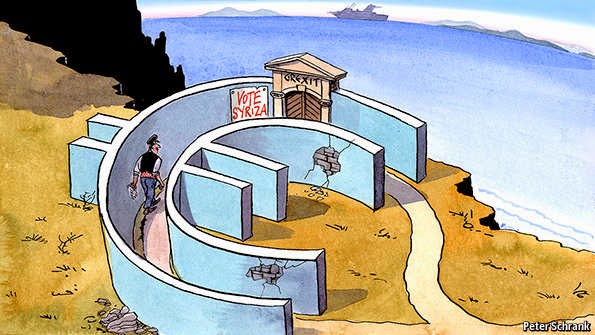 Europe's leaders are often accused of having learned nothing from the euro crisis. But if the run-up to Greece’s election on January 25th has proved anything, it is that politicians have become masters in the dark arts of expectation management. Syriza, a far-left party which polls suggest is likely to win, tells voters it will end the era of austerity, while assuring German taxpayers that it seeks no quarrel with them. German officials quietly tell reporters they are prepared to see Greece leave the euro, while professing the opposite in public. Any vaguely relevant remark by a European Union politician is multiply parsed for subtext or double meaning. Greeks may be forgiven for thinking they need a degree in game theory to decide how to vote.

After six years of recession, five under the tutelage of the hated “troika” (the European Commission, the European Central Bank and the IMF), Greece’s future in the euro is again in question. Alexis Tsipras, Syriza’s fiery young leader, promises a panoply of feel-good policies, including tax cuts and a public-sector hiring spree, and a slashing of Greece’s debt load, which stands at over 170% of GDP. But such pledges seem at odds with those made by Greek governments in exchange for the bail-outs that have kept Greece in the single currency. Greek bond yields have spiked, and there are worrying signs of deposit outflows from banks.