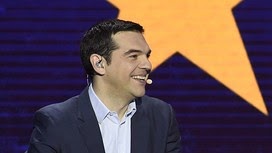 Greece’s hard-left Syriza party burst on to the political scene three years ago by vilifying the country’s international lenders.

Now, as the party moves closer to power, it is declaring a new public enemy: the oligarchs who exercise disproportionate sway over the Greek economy. To ordinary Greeks, they are often referred to as “davitzides”, or pimps.

In an interview with the Financial Times, one of Syriza’s leading economists disclosed the party’s intention to crack down on such politically-connected business figures as he gave one of the most detailed accounts yet of how his party would govern Greece should it prevail in next month’s snap elections.

George Stathakis, Syriza’s shadow development minister, sought to rebut criticism from premier Antonis Samaras that a party with communist roots would threaten to crash the country out of the eurozone and devastate its business sector.

“We want to make life easier for businesspeople, to help remove problems with bureaucracy that they complain about . . . It’s important to be able to create jobs,” he said.