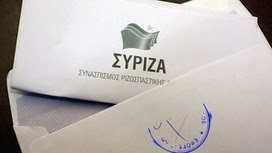 The insurgent leftist Syriza party was heading to a momentous election victory in Greece on Sunday night, throwing down a challenge to European governments determined to resist its demands for extensive debt relief and an end to austerity.

With 22 per cent of votes counted, Syriza led New Democracy, the ruling centre-right party, by 35.3 per cent to 29.1 per cent, casting uncertainty over whether it would win an absolute majority of parliament’s seats. The neo-Nazi Golden Dawn was in third place with 6.3 per cent, followed by the centre-left To Potami with 5.7 per cent.

A Syriza government free of the need for coalition allies would strengthen the leverage of the party’s militant far-left wing — and see the eurozone’s most explicitly anti-austerity government in power since the financial crisis erupted in 2008.

Led by Alexis Tsipras, the party’s 40-year-old leader, Greece would also have one of the most leftwing governments seen in a European democracy since the second world war.