Syriza, Le Pen and the Power of Big Ideas 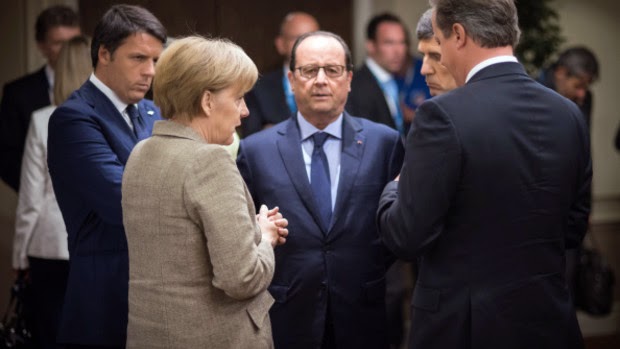 It may seem ironic that Marine Le Pen, the leader of France's extreme right Front National, rooted for the extreme left Syriza in yesterday's Greek election and rejoiced at its landslide victory. Yet there's nothing unusual about it: Syriza, Front National and other European anti-establishment parties are partners in a political revolution that appears to be about to sweep the continent, giving back the original meaning to political terms such as "left" and "right" -- and helping Russian President Vladimir Putin in the process.

For much of the post-World War II era, European nations have been ruled by two-party systems, in which a center-right and a center-left political force alternated at the helm. In France, it was the Gaullist center-right party (now known as the UMP) and the socialists, in Germany the Christian Democrats (CDU) and the Social Democrats (SPD), in the U.K. the Conservative and Labor parties, in Spain the People's Party and the Spanish Socialist Workers' Party, and in Greece New Democracy and the socialist PASOK. As they fought their increasingly ritual political battles, they came to be almost identical in their policies -- at least as far as voters were concerned.

Francois Hollande's socialist government is now so pro-business, its reform proposals are wholeheartedly backed by the national employers' association. Angela Merkel's CDU evidently feels quite comfortable in a coalition with SPD. When the Labor party last ruled in the U.K., it was almost indistinguishable politically from the Conservatives. In these countries and throughout Europe, the convergence of centrist parties into a kind of colorless sludge has led to huge decreases in party membership: 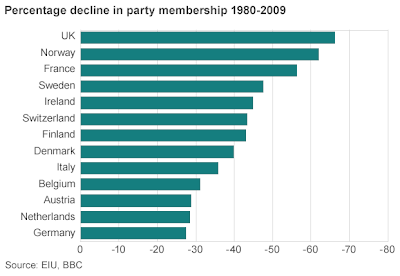 More
Posted by Yulie Foka-Kavalieraki at 4:57 AM