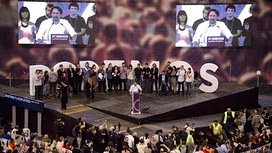 As Greece heads towards a crucial general election later this month, few are watching the campaign more closely — and nervously — than political leaders in Spain.

Viewed from Madrid, the Greek contest looks almost like a trial run for Spain’s own general election later this year. Both countries have been through a bitter economic crisis, and both have seen trust in established parties plummet. Most importantly, both now face a similar political challenge: how to deal with the rise, and possible triumph, of a far-left anti-establishment party determined to break with the economic orthodoxies of the past.

Polls have given Greece’s Syriza party a consistent lead over its rivals — boosting the hopes of the Podemos movement in Spain that it can follow in the footsteps of its Athenian ally. Founded only a year ago, Podemos has developed close links with the Greek party: the two groups are part of the same bloc in the European parliament, and both make the case for an end to austerity and a sweeping restructuring of their countries’ debt. Alexis Tsipras, the Syriza leader, was the star guest at Podemos’s first party congress last year.

More
Posted by Yulie Foka-Kavalieraki at 9:51 AM