So Long, Austerity? Syriza's Victory and the Future of the Eurozone 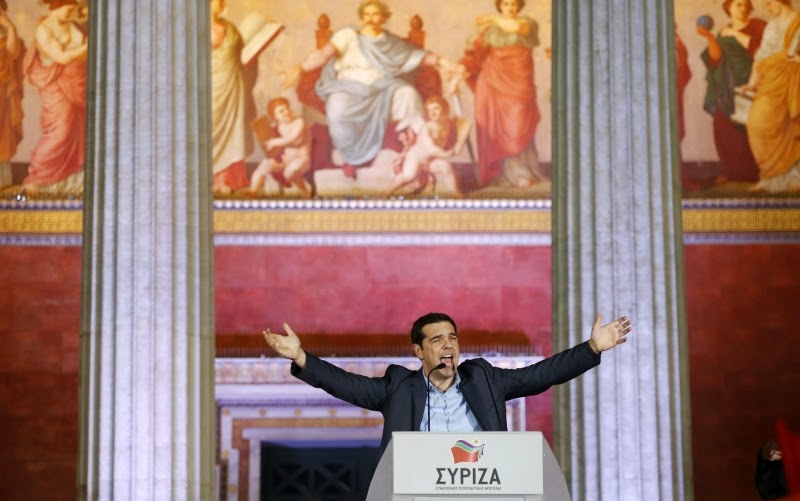 Two and half years after Greeks voted into power a coalition government led by Antonis Samaras, the head of the center-right New Democracy party, they returned to the polls this weekend.

The elections, which were forced because the Greek parliament was unable to select a new president, have propelled Greece back into the world’s headlines. The Coalition of Radical Left, known by its Greek acronym Syriza, won a decisive victory, polling at 36.3 percent of the vote compared to 27.8 percent for New Democracy, 6.3 percent for the neo-Nazi party Golden Dawn, and six percent for To Potami, a centrist party. Those results hand Syriza 149 seats out of 300, and it will form a coalition government with the far-right, anti-austerity party of Independent Greeks (which won 4.7 percent of the vote). Syriza’s 40-year old leader, Alexis Tsipras, who ran a successful anti-austerity campaign, will be the next prime minister of Greece.

Until 2010, Syriza was a small fringe party on the far left. Its transformation to electoral powerhouse is commonly explained as a reaction to the devastating effects of the economic depression that has racked Greece for about eight years now. Since 2007, Greece has lost one fourth of its GDP, and its unemployment rate has surpassed 25 percent. It is, in other words, natural for Greek voters to turn toward a party that is promising them a different economic recipe.

In particular, Syriza has promised to do away with austerity, which was imposed on Greece in 2010 by the European Union, the European Central Bank (ECB), and the IMF (collectively known as the Troika), after Greece’s reckless economic policies caused it to over-borrow and subsequently lose its ability to finance its huge debt. To eliminate its deficits, Greece had to cut spending and raise revenues, a combination that caused widespread economic pain. It certainly didn’t help Greece’s self-esteem that the bitter medicine was administered from abroad.