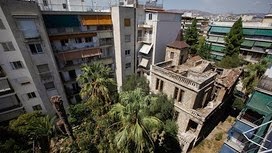 Aspasia Glynou has endured a barrage of pension cuts and tax increases during Greece’s six-year recession in which her monthly income has fallen by almost half.

But a property tax pushed through by Greece’s coalition government and then made permanent is more than the 68-year-old Athenian widow and conservative voter can bear.

That is why she intends to vote for Syriza in Sunday’s election, and one reason why the leftwing opposition party, which has promised to abolish the tax, is poised to win power.

“My late husband would be shocked that I could vote for an ex-communist like Alexis [Tsipras, the Syriza leader] but I think it’s time I took a stand,” said Ms Glynou in her spacious fourth-floor apartment in the capital’s once prosperous Halandri suburb. “Most of my pension now goes to pay [property tax] instalments.”

Known as Enfia, the annual levy on private property was introduced under pressure from Greece’s creditors — the so-called troika of the European Commission, the European Central Bank and the International Monetary Fund — in 2011 as an emergency revenue-raising measure. It was justified on the grounds that an across-the-board annual property tax would bring Greece into line with other eurozone member states.