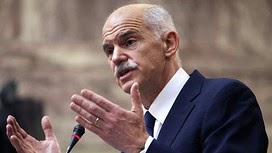 George Papandreou has enjoyed a lucrative stint on the international lecture circuit since being forced from office in 2011 at the height of Greece’s sovereign debt crisis.

Now, the 65 year-old former prime minister is preparing to jump back into politics as leader of a “wild card” party that could swing the outcome of the country’s snap general election on January 25.

Mr Papandreou, the scion of a Greek political dynasty, has so far delayed making a formal announcement amid reports that most of his former associates have refused to cut their ties to the PanHellenic Socialist Movement (Pasok) founded by his father to join a centre-left splinter group.

However, a senior Papandreou aide confirmed on Thursday that the party would be up and running “within the next two or three days”.

One opinion poll published last week suggested Mr Papandreou’s group could win 4-5 per cent of the vote, taking a small but critical percentage from the current frontrunner, the hard-left Syriza party. If so, that could hand victory to the centre-right New Democracy party of premier Antonis Samaras.