How a Syriza government would approach the eurozone 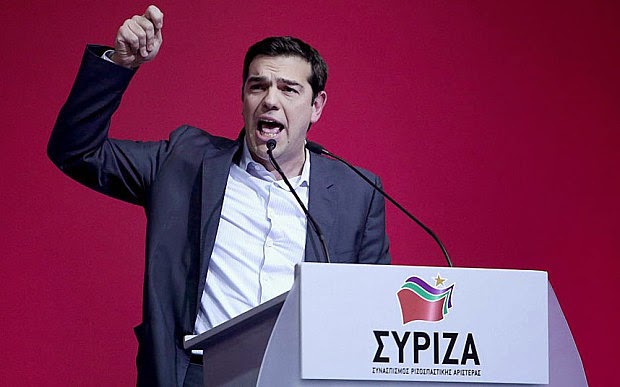 On Monday I attended a very interesting briefing on what economic policies Syriza — the political alliance leading in Greek opinion polls and expected to form a government after this weekend’s parliamentary elections — intends to pursue. The main speaker was the Syriza finance spokesman, Prof Euclid Tsakalotos.

Contrary to certain speculation in the City press, Prof Tsakalotos made it clear there is no chance of Syriza preferring opposition instead of forming a coalition; or of its struggling to form a coalition that would agree upon its central demands of negotiating a haircut of Greek government debts and abandoning the current target for Greece to run a primary surplus (i.e. before servicing debts) of 4.5pc of GDP. In particular, since all the (several) potential candidate coalition partners for Syriza were agreed upon the needs for eliminating the primary surplus target and a debt haircut, these didn’t even count as “red lines” in any coalition negotiation.

A question was raised about whether it was possible for Greece to be included in any eurozone QE programme if Syriza is in charge, given the reports of the past few days that eurozone QE will include Member State governments covering any losses on the purchase of their bonds (as, for example, Her Majesty’s Treasury does in respect of the bonds the Bank of England has bought under the UK’s QE programme). Surely a Syriza government could not agree to cover losses on bonds it is committed to securing haircuts for? Conversely, if Greece is not included in the eurozone’s main monetary policy, could Greece truly be said still to be part of the euro? How, it was asked, might Syriza respond to Greece’s being excluded from eurozone QE?