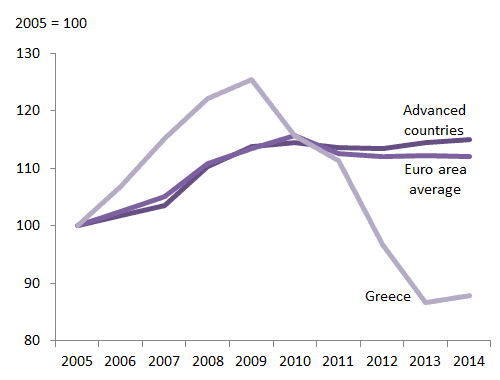 by Paolo Mauro and Jan Zilinsky

It is generally understood that Greece has undertaken a major fiscal adjustment since the beginning of the crisis that engulfed it. But the scale and speed of the decline in government expenditures do not seem to be fully recognized, despite the close attention devoted to Greece by the press in recent years.

In part, this stems from an excessive focus on measures of the deficit expressed as shares of GDP. Indeed, analysts interested in debt sustainability often focus on technical measures such as the cyclically adjusted primary fiscal surplus as a share of GDP. But changes in these measures are difficult to interpret against the background of a staggering contraction of output, and in any case seem inadequate to capture citizens’ well-being.

What is the scale of Greece’s fiscal adjustment from the perspective of its citizens? And how does it compare to other countries?