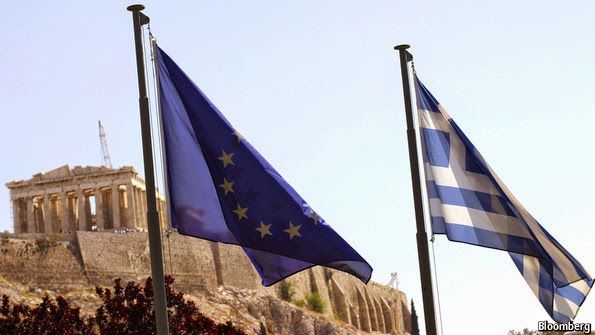 Not for the first time, an impending Greek election is fraying European nerves. The snap election that Antonis Samaras, the Greek prime minister, has called for on January 25th has reawakened fears that Greece might have to leave the euro zone, an outcome that was narrowly avoided in 2012 and could still be disastrous both for Greece and the single currency. A Grexit could happen if Syriza, the left-wing opposition party led by Alexis Tsipras, which is currently ahead in the polls, wins the election and confronts Greece’s creditors with demands they find incompatible with Greece staying in the monetary union. A political decision to expel Greece could be enforced by the European Central Bank cutting off Greek banks from its liquidity operations and payments system. Will the Greek election cause a Grexit?

Such an outcome could occur as a consequence of a game of bluff and counter-bluff on the part of Greece and its European creditors, led by the German government. Syriza wants to get relief on the huge debt that Greece owes the euro-zone governments that bailed out Greece. Mr Tsipras may calculate that European creditors will give way in order to avoid a Grexit, which would hurt the euro zone as a whole by breaking the principle that membership of the single currency is irrevocable. Set against his bluff, the German government has a counter-bluff: it wants to send a clear message that it will not cave in to what it regards as blackmail, not least since this would encourage politicians in other bailed-out economies to follow Mr Tsipras’s example.