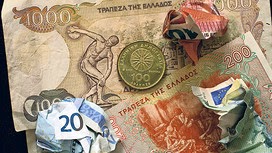 A reluctance to pay taxes was much criticised by Greece’s creditors as one reason why the country needed a big international bailout. Now many Greeks are again avoiding the taxman as they bet the radical left Syriza party will quickly loosen fiscal policy if it comes to power in Sunday’s general election.

A finance ministry official confirmed on Friday that state revenues had collapsed this month. “It’s normal for the tax take to decline during an election campaign but this time it’s more noticeable,” the official said, avoiding any specific figures on the projected shortfall.

However, two private sector economists forecast the shortfall could exceed €1.5bn, or more than 40 per cent of projected revenues for January.

Angeliki Mousouri, a dentist who is paying off more than €20,000 of tax arrears, said she missed a monthly instalment due in December.

“I don’t expect to be penalised,” she said. “If Syriza is the government they will show leniency to cash-strapped taxpayers.”