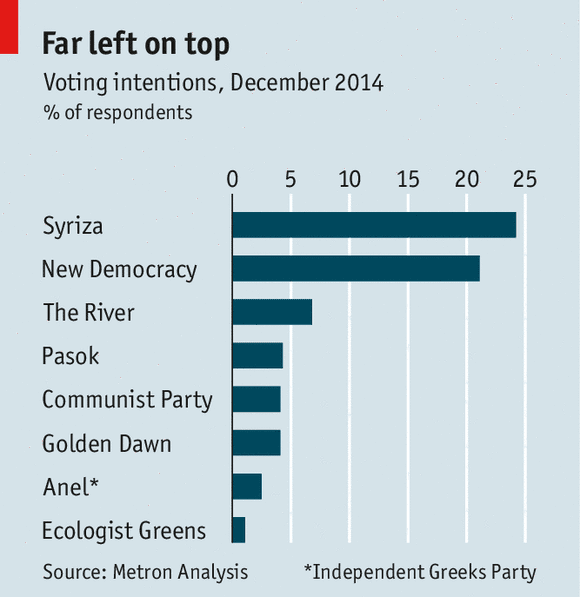 The far-left Syriza party continues to hold a small but steady lead in the polls ahead of Greece’s election on January 25th. After such a long period ahead of the ruling party, this lead seems unlikely to be overturned in just two-and-a-half weeks, say pollsters.

Yet Alexis Tsipras, the firebrand Syriza leader, has been toning down his anti-European rhetoric. He now says no “unilateral” decisions will be taken on Greece’s obligations to its creditors, a signal that a Syriza government would not surprise markets with an immediate default. Mr Tsipras’s message to voters is simple: a promise to end four bleak years of austerity with a splurge of social spending.

The café debate has shifted, too. It is no longer about whether the centre-right New Democracy party led by Antonis Samaras, the prime minister, can pull off a last-minute victory (Mr Samaras still has a higher personal approval rating than Mr Tsipras), but over which small party would be Syriza’s most likely coalition partner. For Syriza officials concede they may well fall short of an outright majority, even with the 50-seat bonus that goes automatically to the party that finishes first.