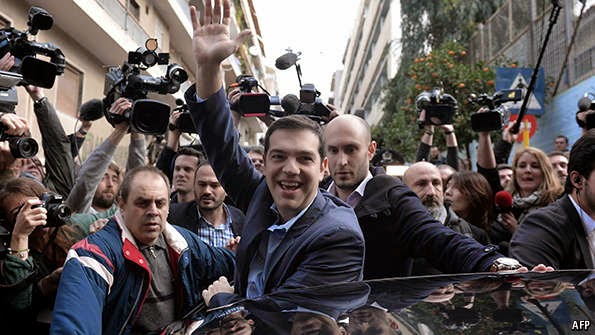 Syriza's unequivocal victory in Sunday's Greek elections reverberated all over Europe. It had been widely assumed that the left-wing populists and their charismatic young leader, Alexis Tsipras (pictured), would win a plurality of the votes, but the margin of victory was at the high end of expectations. In other European countries, Syriza's win gave inspiration to populist anti-austerity parties on the left and right. European governments, meanwhile, issued diplomatic congratulations to the victors, while quietly worrying that the deals struck during years of negotiations, to rescue Greece from default and keep it in the euro zone, will now be torn open.

Syriza's winning margin over the incumbent New Democracy party of Antonis Samaras fell just short of an outright governing majority. Including the 50-seat bonus which Greek election rules grant to the party with the largest share of the vote, Syriza mustered 149 seats in the 300-member parliament. Mr Tsipras moved swiftly to consolidate his victory. On Monday morning he launched coalition talks with an unlikely but willing candidate: Panos Kammenos, the leader of the Independent Greeks, a small right-wing party. Mr Kammenos quickly announced that the two parties had struck a deal. Although opposed to Syriza in their overall ideology, the right-wing Independent Greeks share Syriza's antipathy to the terms of Greece's bail-out, and its attendant dose of stringent government austerity.

With 13 seats, Mr Kammenos could provide a workable majority for a Syriza government. One Syriza aide says Mr Tsipras might even announce his cabinet by Monday evening. Mr Tsipras was also due hold talks later on Monday with Stavros Theodorakis, leader of To Potami (The River), a centre-left party entering parliament for the first time. Mr Theodorakis would refuse to join a Syriza-led government but could provide additional parliamentary support.

More
Posted by Yulie Foka-Kavalieraki at 2:30 AM