Greece should not play chicken with the euro 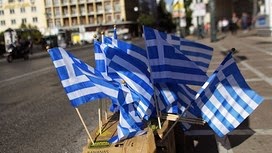 The year 2014 may be remembered for the striking advance of radical fringe parties across Europe. The months ahead could see one of their number assume power. Greece heads for the polls on January 25, following a failure to agree a new head of state. The far-left Syriza, a party that three years ago barely registered on the national map, is now favourite to form the core of the next government. It may be the most significant election in Greece’s post 1974 democratic history.

Syriza and its leader Alexis Tsipras rose to prominence through outright opposition to the international bailout that the government negotiated in 2012. In the past Mr Tsipras has pushed an alternative policy that would have seen it repudiate chunks of Greece’s debt, reverse public spending cuts and even exit the single European currency.

Three years ago, such threats would have instilled terror in bond markets across the continent. Now, the firewalls erected by the EU to slow financial contagion appear to work; while Greek shares and bonds have swooned, those issued by Spain and Italy now yield less than 2 per cent.

Proximity to power has blunted the ferocity of Syriza’s assault on the bailout regime. Mr Tsipras now declares himself committed to the membership of the euro. Rather than hinting at a repudiation of Greek debt, he talks more moderately of a renegotiation.