Greece, religion and geopolitics: A hint of civilisations clashing 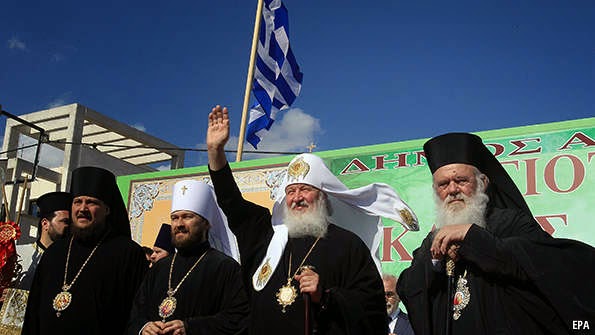 As my last posting noted, the first edgy thing which the new Greek government did was to downgrade, albeit very politely, its relations with the church. The second thing was to upgrade a relationship whose historic roots are at least partly religious, with Russia. On his first day in office, prime minister Alexis Tsipras met the Russian ambassador, and then distanced Greece from an EU statement which protested over Russian actions in Ukraine and threatened further sanctions. He then named a foreign minister, Nikos Kotzias, who enjoys cordial relations with the religious-nationalist segment of the Russian elite.

Lots of questions arise. Is this a great historical paradox - the consolidation of a sentimental tie based on common Orthodox Christianity, under a secular Greek government and a stridently pious Russian one? That would be an interesting reversal of the cold war. Or is the relationship more cultural and historical, based on common memories of shimmering mosaics and swirling incense, rather than actively religious? If that is true, then it is not particularly dependent on what people on either side now believe.

More
Posted by Yulie Foka-Kavalieraki at 11:24 AM