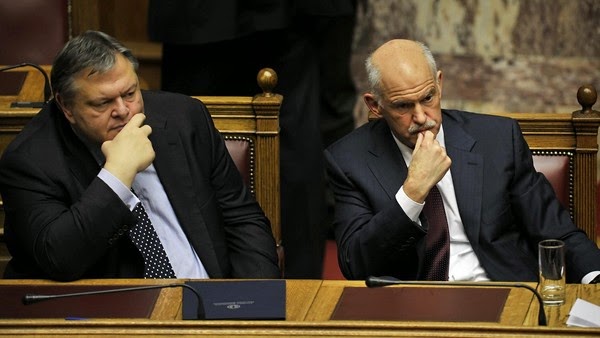 Just three years ago, they were the two political giants who embodied Greece’s struggle with its €245bn bailout: George Papandreou, the son and grandson of Greek prime ministers, was the sitting premier while Evangelos Venizelos, a brainy lawyer and political operator, sat close beside him as finance minister.

But heading into Sunday’s national elections, the one-time allies are now locked in a political death match, heading rival parties struggling to win enough votes to cross a 3 per cent threshold just to get into parliament.

Mr Venizelos is now the leader of the party both men long called their political home, centre-left Pasok, which in 2009 elections, the last before the crisis hit, took a whopping 44 per cent of the vote. Recent opinion polls put it between 4 and 5 per cent.

It is Mr Papandreou who forced the showdown last month by breaking from the party his father founded to set up his own, the Movement of Democratic Socialists, which the former prime minister says is intended to retake the reform initiative he believes was lost after his government fell — with a healthy nudge from Mr Venizelos — in November 2011.

“It was obviously a difficult decision,” Mr Papandreou said in an interview. “I worked with the party for many, many years. We had lost the centre of what I feel needs to change in Greece, and that is this highly clientelistic-driven politics and establishment.”