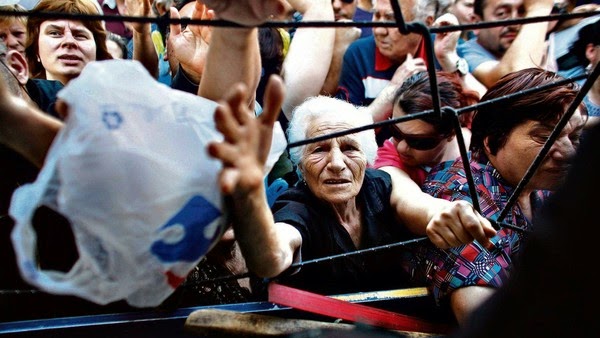 It is 1.15pm on New Year’s Eve when a delivery van pulls up outside a ground-floor apartment in Ilioupolis, a middle-class Athens neighbourhood fallen on hard times. Residents queue patiently in the courtyard as volunteers from Bread and Action, a Greek charity, unload cardboard boxes filled with fruit, vegetables and bakery products that are 24 hours past their sell-by date.

“We get two bags almost every day. We couldn’t survive without them,” says Spyros Angeli, an Albanian construction worker with three children who settled in Greece two decades ago. “I haven’t worked for nearly three years, and my wife gave up her sewing job recently because she hadn’t been paid in six months. Our savings have almost run out.”

Two days earlier, the Greek parliament failed to elect a new president, triggering a snap general election scheduled for January 25. This set the stage for weeks, if not several months, of fraught post-election negotiations between Greece and its international creditors, with no clear answers to three questions.

Will Greece stay in the eurozone or drop out? Will it continue reforms of the economy and state administration that its creditors regard as essential conditions of future assistance, or will its voters identify these reforms so closely with foreign-imposed austerity that they say good riddance to both? And will Greece’s troubles infect the rest of the eurozone, as they did so dangerously from 2010 to 2012?