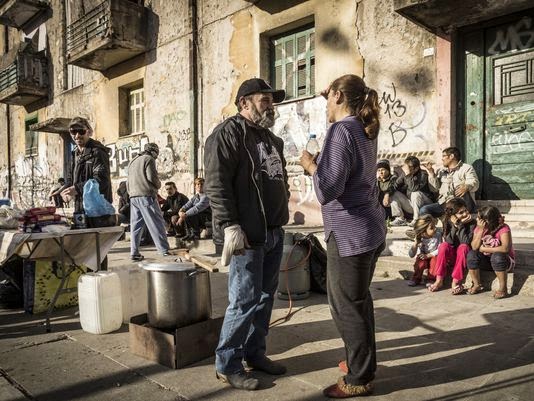 Every day for the past two years, Konstantinos Polychronopoulos has set his pop-up soup kitchen in the street to offer free food to passersby.

"Our food is for everyone," says the former marketing executive who lost his job when the Greek financial crisis struck in 2009. "It's not charity, it's solidarity."

Greece's economic crisis and austerity measures the past six years have hit Polychronopoulos and his fellow citizens hard. They've lost patience with struggling and get to vote Sunday in a national election that gives them a tough choice on how to handle the country's economic crisis.

Polls show Syriza, a relatively new left-wing party, is likely to win big in the parliamentary elections, and its leader has pledged to renegotiate the terms of bailouts by the European Union and International Monetary Fund that have led the government to hike taxes and make cutbacks.

Despite the bailouts, Greece's gross domestic product has contracted about 30% compared with seven years ago. Unemployment has reached 26% — among youth, the jobless rate jumps to 60%. A third of the population lives below the poverty line.