Greece and its discontents 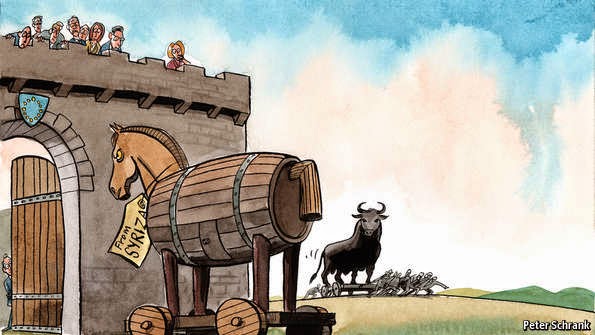 Everything that exists, taught Aristotle, is the same as itself, and is different from everything else. During the hot years of the euro crisis, leaders of the most troubled economies sought desperately to remind investors of this eternal truth. Portugal, insisted its politicians, was not Greece. Nor was Spain Portugal, Italy Spain or France Italy. In short, the problems of one country were distinct from those of others. Yet the bond markets, disinclined to follow ancient wisdom, saw things differently. The contagion caused by spiralling borrowing costs leaping from one country to the next was one of the most alarming features of the crisis—and it explained how problems in tiny Greece could threaten the single currency as a whole. For a time, whenever a finance minister assured investors that his country was different, one could bet that it would suffer the same treatment.

Lately the euro zone has appeared better protected. In June 2012, with Greece in political turmoil, yields on Spanish ten-year bonds topped 7%. This week they were near record lows, despite the election of an explicitly anti-austerity government in Greece. The early antics of Alexis Tsipras, the new Greek prime minister, spooked markets and again raised fears of Grexit. But the channels of contagion have narrowed, thanks to a partial banking union, a permanent bail-out fund and a restructuring of Greek debt, most of which is now in official hands. Investors at last seem to agree that Spain is Spain, not Greece.

Yet voters may be drawing a different conclusion. Over the past year the growth of Syriza in Greece has been mirrored by the rise of Podemos (“We Can”) in Spain, a radical far-left party that considers itself to be waging a similar war on German-sponsored austerity. Leftists from across Europe flocked to Greece on election night to savour the sweet taste of Syriza’s victory. Sympathetic pundits declared an end to the politics of austerity. Mr Tsipras’s decision to form a coalition with an unsavoury bunch of nationalists soured the mood somewhat. But overall, the message seems clear: if financial contagion is now less of a worry, the political sort may just be starting.